When we launched Picture This Clothing in August of 2016, things blew-up virally on the internet before we had a chance to even process what was happening. The internet being what it is, I got to hear lots of rage about what a really horrible, horrible person I was, and message I was sending to feature on our website little girls wearing makeup. For the record, I didn’t put makeup on the kids on our website.

We launched Picture This Clothing as a proof-of-concept back in August of 2016. For proofs-of-concept you do as many things as swiftly and on the cheap as possible just to get the idea out into the world. We still did it with care for quality and detail, but one of the things we did as swiftly and inexpensively as we could was take our own website/product photos. We didn’t hire models or a photographer. I had an iPhone 6 and two seven-year-olds eager to help out.

When we first launched, we only offered dresses. T-shirts are far more complex garments to make (all of our garments are cut & sew, we don’t use pre-assembled clothing), so we figured we’d test the dresses first and see how it went, if things went well we’d add t-shirts, and so-on. Additionally, this concept was born out of a dress I’d made for my youngest daughter Zia from a drawing she’d done, so dresses just seemed to make sense as a starting point.

Zia’s best friend Gigi had spent the night, her parents had given permission for her to participate with Zia in a photoshoot for our little idea. The girls knew it was “picture day”, so after breakfast I asked them to go get picture-ready. In my mind, this meant brushing their hair and teeth. Gigi and Zia interpreted it differently. They vanished for a good hour, I was sidetracked getting the space ready for photo-taking but eventually they emerged “ready” for their big photoshoot… 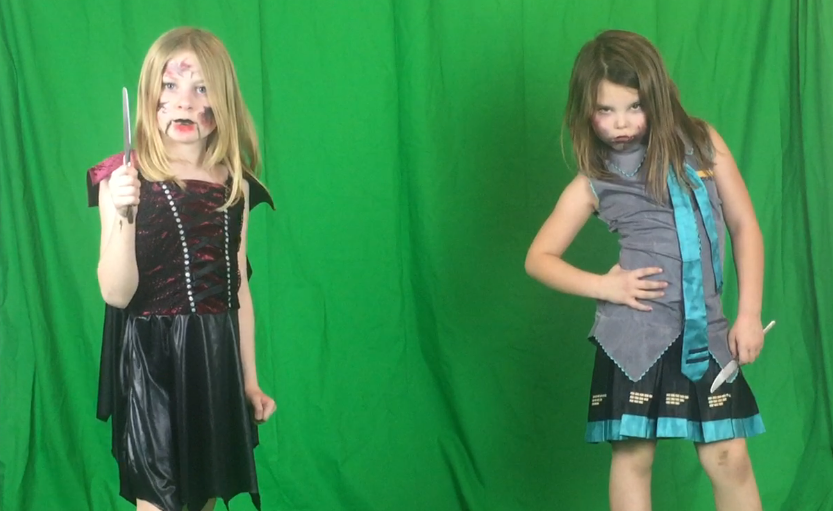 Please don’t focus on the creepy butter-knives they’re holding, we don’t make habit of playing with kitchen cutlery in our home. They asked if they could use them specifically to take “scary photos”, I said yes since they’d done all this fine work on their faces and costumes. Gigi and Zia have been best friends since they met at day-care when they were two-and-a-half years old. This, to me, (sans butter-knives) is a totally normal morning with these two. They play. They dress up. They imagine. They giggle. They dream.

But ya, I had some face scrubbing to do to get them to the point where we could take the photos that were used on the website. I really thought I’d done a pretty good job considering where we started. We had to wait until some of the redness went away but I didn’t have all day to wait, so we worked with what we had to work with. This my friends, is what happens behind the scenes. There’s always stuff no one sees, but you know some folks on the internet, always quick to fire the hate and judgement. 😉

Zia and Gigi were seven in these photos. They use makeup for play, not for self-esteem. And definitely not because some grown-up told them they needed it. I think it’s great both creatively, and expressively, and because they did it themselves.

I welcome all thoughts on kids and makeup!
❤
–Jaimee

[this blog originally posted here on Jan 6, 2019 on my personal website.]